Driving north on Sierra Hwy N of Kernville, California; Passing Fairview & the Johnsondale bridge; After the R Ranch @ Johnsondale, take the right fork off the main highway, which goes deep into Kern River Gorge. This narrow & winding paved road skirts the Upper Kern River Gorge & the impressive Rincon Fault. Numerous primitive camp site can be found on dirt roads off this paved route. The pavement dead ends at Jerky Meadow trail head, which accesses the Golden Trout Wilderness & the Great Western Divide. Backpackers can get to the high country Sierra Nevada & Mineral King in Sequoia National Park from these trails. 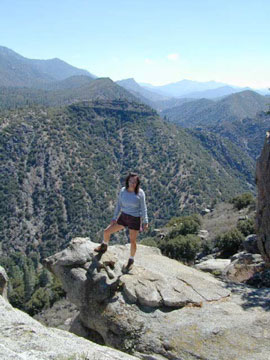 Boy Scout Camp Whitsett is one of the first places you pass, near Sentinel Peak.

The Western Divide Hwy runs parallel to road 22S82; way up above it @ 7000′ elevation – with destinations like Dome Rock & the Needles (2 very cool granite features) that overlook this Kern Gorge. The small community of Ponderosa, CA is also up there, along with the quaking aspen groves & the Trail of 100 Giants. Forest Rd# 22S02 connects paved route 22S82 to the Giant Sequoia highway above.

There are many primitive camp areas way above Kern River Gorge – all located on the right side of this road 22S82. Look for small signs for CAMP AREA #1-6. Camps 1-3 are great for RV campers with creeks & dense forests. Long Meadow Creek is one of the first of many streams, you will cross as driving this paved, winding, canyon route. Camp areas #4, 5, & 6 are the best bet for seclusion, plus awesome hiking trails to falls, granite pools & the impressive Kern gorge. Swimming holes are plentiful. Fishing can be decent at times. Many waterfalls can be found in this region as the tributary streams fall towards the deep granite gorge in the Sierra Nevada range. All roads off of 22S82 are dirt roads & most are passenger car accessible. Wetter months could be challenging. Some routes back here are considered to be 4×4 routes tho, so know your vehicles limitations. High clearance is needed to reach some camp sites. Summers can be busy.

This area was burnt from recent wildfires in 2002-2005, but the primitive, dispersed campsites near the streams are full of vegetation & making a nice comeback. Alder Creek runs down from the Sequoias, into Dry Meadow Creek nearby.

Lower Peppermint Campground @ 5300′ elevation, on the west side of the road, is the only developed camp ground on this main forest road. Lower Peppermint has 17 spots, piped water, & picnic tables. Peppermint Meadows & Peppermint Creek are adjacent to the camp area.