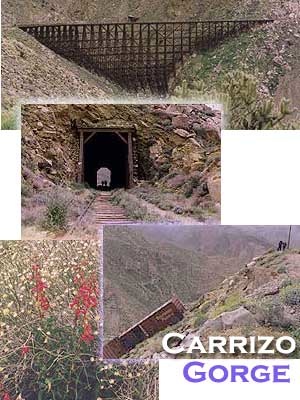 Carrizo Gorge Goat Trestle – via Mortero Wash. Near the south end of Anza Borrego State Park is the infamous ‘goat trestle’, one of the largest wooden rail road trestles in the US.

This hike can be reached by driving N on County Road S2 (from I-8) into Anza Borrego Desert State Park. Near park boundary keep your eyes peeled for Mortero Canyon Rd (signed) on the left side. This is a sandy dirt road, accessible by passenger car, that leads out to the train tracks & then past to the Mortero Big Boulder campsites. Park at rail road tracks near water tank & start hike from here.

NOTE: Do not be alarmed if you happen to see NUDE hikers coming from the opposite end of this railway, where a nudist resort is located along Interstate 8, called De Anza Springs.

Ground was broken on September 7, 1907 by San Diego’s Mayor, John Forward and the construction of the 140 mile route was completed on November 15, 1919. The first through train was the called the “Golden Spike Limited”, named after the $286 golden spike, which John D Speckels drove into the ground near tunnel #8.

The Carriso Gorge section has fallen into disrepair with two trestles being burned and the collapse of two tunnels as the result of fires. The trestles have been rebuilt and one of the tunnels has been repaired but as of 2002 this scenic section of track is used mostly by hikers and mountain bikers. The sounds of the trains exist only in our imagination. 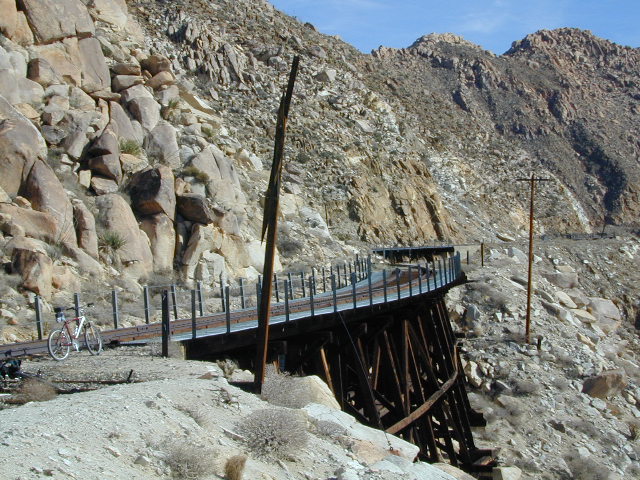 Other Facts: Derailed cars are from 1984 and were filled with bags of cement. Laborers were brought in to unload the cement but the cars were left. The Goat Canyon Trestle is 185″ tall and 600″ long. During its use it was the tallest wooden structure in daily use. This trestle was designated a Historic Civil Engineering Landmark in 1986. Carrizo means “reed grass” in Spanish. Total cost of construction was $18 million.

In 1979 the SD & AE west of Plaster City was sold to the Metropolitan Transit Development Board for $18.1 million. SD&A was said to stand for “Slow, Dirty and Aggravating” because of the high temperatures, smoke and open windowed trains cars.